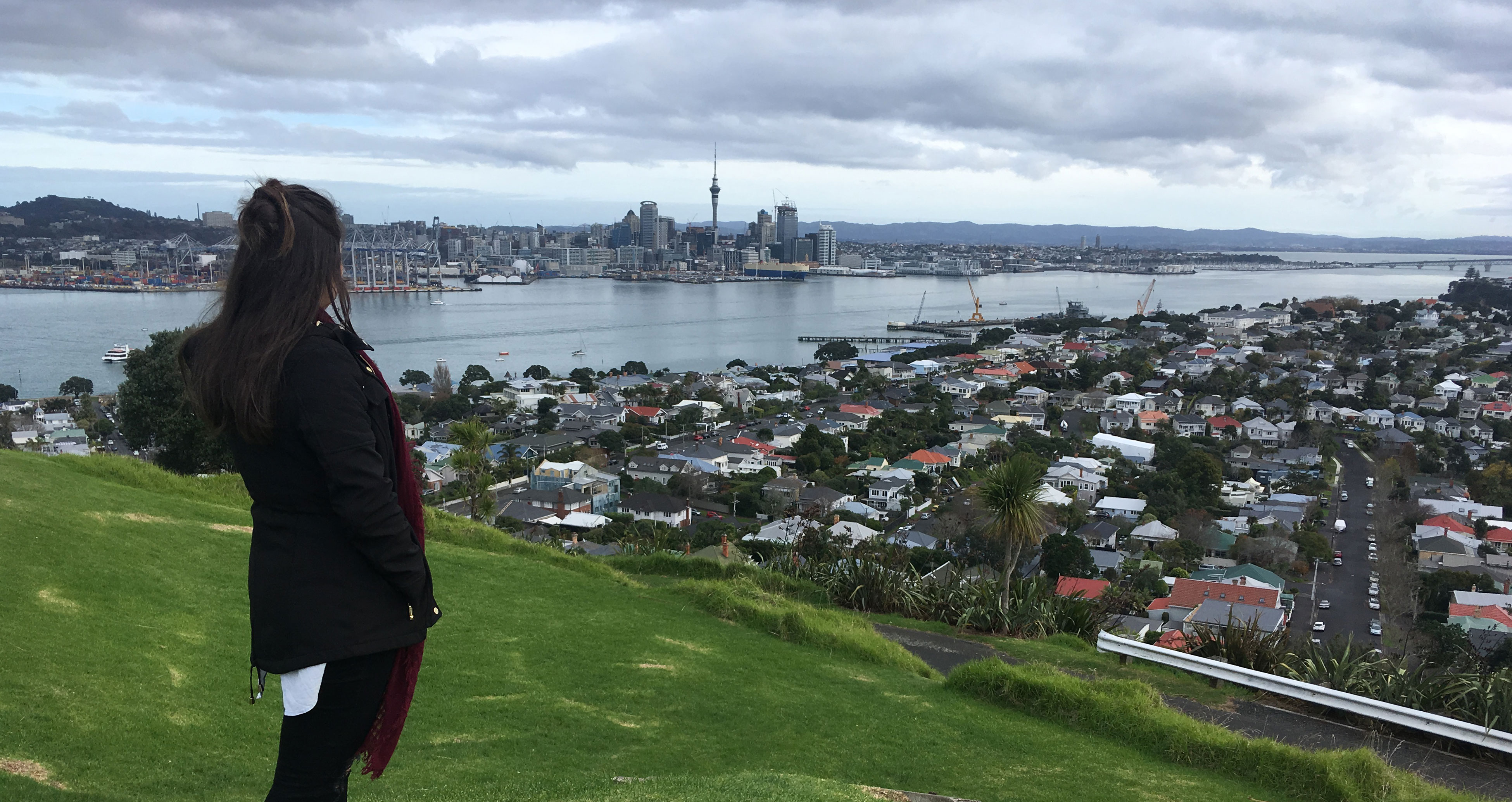 Despite having grown up travelling the world and living on Australia’s East Coast, until recently, I had never been to New Zealand. I guess it’s the mindset of ‘it’ll always be there, it’s so close’, that never had me urgently looking to visit “the country across the pond” (I know, it’s a poor excuse, but gotta be real). Nonetheless, when I saw cheap tickets to Auckland, that was all the convincing I needed to make my first trip to Aotearoa – the land of the long white cloud.

Located in the North Island, Auckland is New Zealand’s largest city and business hub. Just a short 3 hour flight from Sydney, it makes for a perfect destination for a long weekend or short getaway. While we were there for 5 days, you can comfortably experience the city and its immediate surrounds in a long weekend (or 3 days). So, whether you’re visiting Auckland for an extended weekend or have a few days spare in the city, these are the top areas you need to explore. A 40-minute ferry ride from Auckland, Waiheke Island is a world of its own. If beautiful landscapes, walking trails and award-winning food and wine is your thing, you’ll love it here!

Of course, one of the islands’ biggest draw cards is its vineyards – the small 92km2 island boasts more than 25 wineries! Commonly referred to as ‘wine island’, most of the wines produced use Bordeaux-type grapes, as the temperature and soil are similar to that found in the famous French region.

There are many options when it comes to exploring some of the Island’s wineries, with plenty of tours available. However, to make the most of the outdoors, and to give us greater freedom in choice of which wineries we visited, we opted to use the local bus service and wine trail to travel around Waiheke Island. There are two bus options; a Hop-On-Hop-Off, or the local bus service offers all day passes for $10.

We decided to stick to wineries that were within close proximity to each other (to make getting to each one simpler, which also meant less time travelling between wineries, so more wineries to try!). Following the walking wine trail (Waiheke Island has walking tracks that connect the island’s wineries), we started our day at Tantalus, where we sampled the Reserve Flight, which included tastings of Estate Merlot Cabernet Franc 2015, Ecoile 2015, Evoque 2014 and Ecluse 2015 for $15pp.

From Tantalus, we followed the wine trail to Stoneyridge Vineyard where we sampled the Waiheke Tasting, which included tastings of Stonyridge Sauvignon Blanc 2017, Stonyridge Syrah 2017 and Stonyridge Pilgrim 2017 for $15pp; Te Motu, where we sampled the weekly wine tasting flight for $20pp, which included tastings of Dunleavy ‘The Shed’ Rose 2018, Dunleavy ‘The Grafter’ Syrah 2016, Dunleavy ‘The Strip’ Single Vineyard Cabernet Merlot 2015, Te Motu 2009 and Te Motu 2013 and devoured a cheese platter, taking breaks only to have a little cuddle with Skipper, the vineyard dog; and finished the day at Obsidian Vineyard, where we sampled a flight that included the Obsidian Reserve Viognier 2014, Obsidian Estate Syrah 2017, Obsidian Estate Vitreous 2015 and The Obsidian 2014 for $15pp.

Getting around the island was super easy. From Auckland, we caught the Fullers Ferry ($40 return) and using the $10 all day bus ticket, we bussed from the Matiatia Ferry Terminal to Oneroa, where we spent an hour wandering about the small town, before preparing for the day with a coffee and cake (responsible, right?). From there, we caught the bus to Tantalus, and travelled between the four wineries along the Walking Wine Trail. Ending the day at Obsidian, we caught the bus back to the ferry and made our way back to Auckland.

Of course, there are many other wineries that we (unfortunately) didn’t get the time to check out. However, if you do have the time, there are plenty of accommodation sites on the island. In addition to wine, there’s also plenty of hiking, beaches and other outdoor activities that visitors to Waiheke Island can enjoy.

Explore the city and its surrounding neighbourhoods For a relatively small city, Auckland sure does pack a lot in! I’d be lying if I said we didn’t go to new suburbs following our tummies – the produce in New Zealand is next level, there’s simply no bad food! While we were eating our way around the city, there was no ignoring that each new suburb has its own distinct personality. These were our favs:

Sidenote: Getting around Auckland is super easy. Buy and top up an ATcard and you can then use the trains, buses and ferries.

With its growing high-rise skyline, mixed with volcanic cones and quaint heritage-style housing, Auckland’s CBD is an easy-to-navigate grid of streets that hum with life. Stroll along the city’s waterfront from the Viaduct to Wynyard Quarter, eat and drink your way through quirky Britomart and get amongst the action at Sky City; Auckland’s entertainment destination.

A short, 5-minute drive or 30-minute walk from the CBD, Ponsonby is the suburb to visit for hip cafes, restaurants, bars and boutique shops. It doesn’t matter what time of day you visit Ponsonby, there’ll always be life about and something to do!

Auckland’s oldest neighbourhood, the high street in Parnell is lined with quaint vine-wrapped buildings, quirky cafes, small art galleries and plenty of small homeware and stationary boutiques. Of course, the highlight of Parnell is the La Cigale French Market, which is held every weekend and is the place to get all of your fresh produce, cheese, bread, coffee, oils and homemade preserves.

Known as the shopping capital of Auckland, Newmarket is where you need to go for all of your shopping, spa, restaurant and bar needs! The high street is lined with designer fashion boutiques, while the rest of the town boasts over 100 restaurants and bars, so there are plenty of places where you can replenish yourself between shops!

Home to Auckland’s highest volcano, Mount Eden is where to go to get those panoramic views of the city. Unfortunately it was raining and cloudy the day we ventured out to Mt Eden, so we didn’t do the hike. However, the village itself is super cute and filled with lots of bookstores and cafes.

A short 12-minute ferry from Auckland will land you in Devonport; the North Shore’s southernmost point. Strolling through the township is like walking through a painting; the streets are lined with quaint Victorian-style villas and quaint boutique’s.
To get some pretty impressive 360 degree views of the city and the surrounding Hauraki Gulf, the hike up Mt Victoria is well worth it (or, if walking isn’t your thing, there are also segway tours to the top offered). It’s crazy to think that just 45 minutes west of Auckland, you find yourself in the Jurassic-like landscapes of the Waitakere Ranges. While you can use public transport to get to Auckland’s West Coast, hiring a car is much easier. We used Your Drive, a car sharing app similar to AirBnb, but for cars instead of homes.

Leaving Auckland at around 10am, we spent an entire day exploring the vast west coast. These were the highlights:

The southernmost beach that we visited on the west coast, Whatipu is a black-sand beach surrounded by sand dunes, rocky cliffs, caves and wetlands. If you have a spare 45-minutes, you can do the hike from the car park to the old sea caves. Unfortunately, we didn’t get too far in the cave hike; having rained so much, the path was completely washed out. So we just spent our time wandering along the beach and amongst the caves that surround the beach.

An hour slightly northeast of Whatipu, our next stop was the Karekare Falls. Located in the western part of the Waitakere Ranges National Park, Karekare is one of New Zealand’s must-see waterfalls. It’s also super accessible, and only a 10-minute walk from the carpark!

Just 15 minutes from Karekare, the Kitekite Falls is a three-tiered waterfall with a drop of about 40 metres. Getting to the Falls is a short 45-minute hike from the carpark, through luscious, green rainforest. In the summer, the base of the falls becomes a popular swimming place.

One of Auckland’s most popular surf beaches, Piha was the perfect place for us to end our West Coast adventure and watch the sunset. A blacksand beach, Piha is well known for its famous Lion Rock; an iconic landmark that resembles a lion, watching over the waves.

Pin it for later!